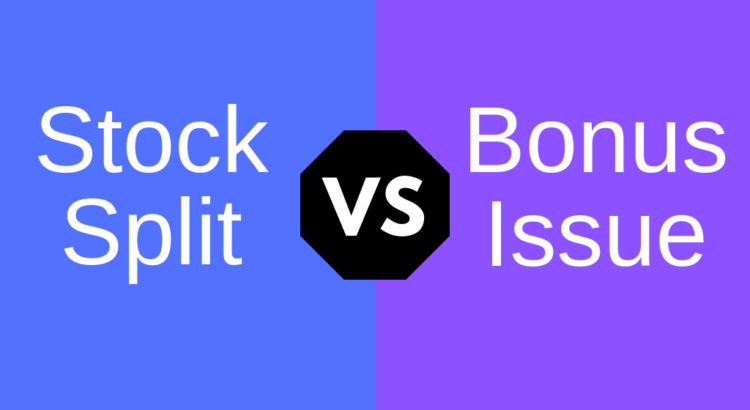 Stock Split and Bonus Issue are two of the many corporate actions that companies listed in the stock market take up to increase their quantity of shares being traded. Although most people think they are the same, they are not.  In this post, you will understand Stock Split vs Bonus Issue in complete detail.

Stock Split is one of the many corporate actions taken by a company, where it reduces the face value of its shares, thereby increasing the number of shares outstanding with the public. This decision is taken by the Board of Directors of the company.

So if we compare the two, we realise that both are very similar but not the same as they vary on certain points as mentioned below. 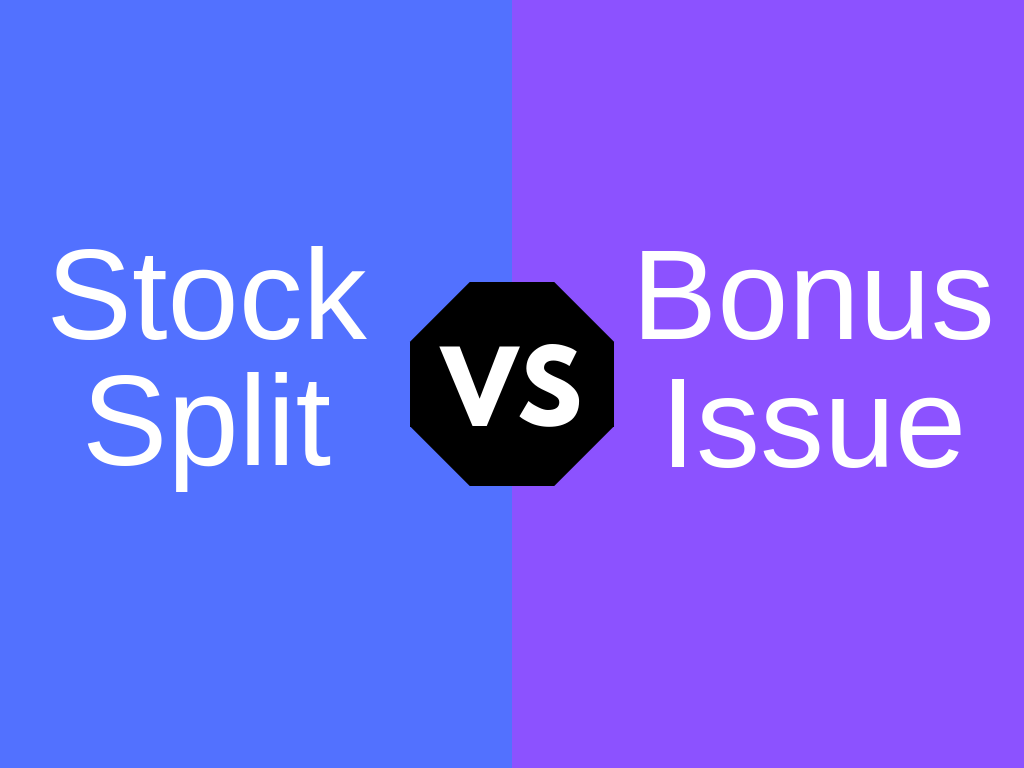 Effect on the Market Price of the stock

Whenever there is a stock split in a company, there is an increase in the number of shares outstanding with the public but the face value of the shares reduces, thereby affecting the market price of the share.

For example, if there is a 2 for 1 stock split then existing shareholders double their invested quantity but the market price is halved. So for an investor, the net effect on the value is nil and the market capital does not change.

For example, if a bonus of 1:1 is announced, the investor will get one bonus share for every one share held though, after the record date, the price is adjusted and become half.

Here there is no change in the face value of shares.

There are two totally different reasons why a company does a Stock Split or issues Bonus Shares.

When the company’s stock price rises to a very high level the investors or traders feel it is very expensive to invest or trade in such companies, compared to their peer group companies. Such feeling may halt further increase in the stock price or may even trigger a selloff.

To lure investors to invest in the company and to create more liquidity in the market the Board of Directors may decide to split the stock.

The main purpose of the stock split is to get the price of the shares to a more affordable level and create more liquidity of that stock in the market. A stock split affects the company’s authorised share capital.

For example,  if the market price of a company reaches Rs.2500 and the number of shares authorised are say, 1 crore, the face value of such shares is Rs. 10, so the total market cap is Rs.2500 crores, then you will find it expensive to invest, feeling that it is fully priced, so the Board decides to split the shares and the face value is halved to Rs.5. Then the number of shares outstanding doubles, from 1 crore to 2 crores but the market price becomes Rs.1250 with no change in the market capitalisation.

So now it seems more affordable and if the price moves up to Rs.1300 there will be capital appreciation and the investor will earn on the extra shares received due to the stock split.

When a company issues bonus shares it will be from the company’s reserves as shown in the Balance Sheet. As the reserve increase, the company feels the need to reward its investors and therefore issues free shares to them, rewarding them for their current investment in the company.

The company increases its share capital, but not the net assets, by issuing bonus shares. Though the share capital increases the market capitalisation remains the same as the price in the market is adjusted in the ratio of the bonus announced.

For example, if in the Balance Sheet of a company there are Reserves which have grown over the years then, rather than giving dividend in cash the company issues Bonus shares, as a return on investment to their investors.

This is perceived by the markets as the company being fundamentally very strong, having healthy reserves and of course, the investor’s wealth increases with further appreciation in the market price appreciation due to increase in investor confidence.

Effect on the Balance Sheet

In case of a stock split, there is no real impact on the Balance sheet of the company except there is an increase in the share capital of the company and the face value of the authorised shares capital reduces.

Effect on the Investor Portfolio

For the investor in the company announcing a stock split, his total invested quantity will increase. But as the Face Value decreases, the market price will also be adjusted and hence there is no significant gain.

This is unless the market price of the share appreciates due to the reduction in the market rate due to new demand in the stock at a lower market price.

In case of bonus shares, the investor gets extra shares for free but the market rate is adjusted in the Bonus ratio and so his invested value remains the same. Only when the market price of the share appreciates the investor is able to gain value on his investment.

It has been observed that whenever any company announces a bonus issue the price always appreciates even after the record date.

We have seen that Stock Split and Bonus Issue are two different corporate actions undertaken by a Company. Though they are quite similar in their effect on the balance sheet and investor’s wealth, they are not the same.

Stock Split is undertaken to increase liquidity and control the market price of the shares, Bonus Issue is to reward the investor for the confidence shown in the company and the reward is not a burden on the cash flow of the company.

What is Short Selling in the Stock Market?

What is Expiry in Indian Stock Market?

How to pick stocks for Intraday Trading?

Soujay Shah is associated with the stock market since 1992. With over 25 years of experience now trains people on ways to make money in the stock market. He is a SEBI Registered Research Analyst and has certification in NISM for Equity, Derivates and Currency segments. He is a practicing Numerologist and Tarot reader.