The name of this single candlestick pattern is the paper umbrella, because of its resemblance in shape to an umbrella. In the nomenclature and interpreting of these candles, the position of occurrence and of course the shape are important factors.The colour is insignificant in analysing these patterns as the difference between the opening and closing price is small, or in other words, the body is small.

If the paper umbrella appears after a downtrend, it is called ‘Hammer’.

If the paper umbrella appears after an uptrend, it is called ‘Hanging man’.

The hammer is a bullish candlestick pattern that appears after a downtrend. A hammer has a small body at the upper end of the trading range with a long lower shadow. The longer, the lower shadow, the more bullish the pattern. A hammer can be of any colour as it does not matter. Still, it is a bit better to see a blue coloured body. On the day the hammer pattern is formed, the buyers are attracted, which moves the prices higher. 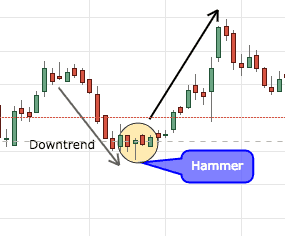 The hanging man is a bearish candlestick pattern that appears after an uptrend. It signals that a decrease in the price of the stock is on the cards.

Although both the hammer and hanging man are proper candlestick patterns, it has been observed that hammer has a greater success rate/efficiency as compared to hanging man. However, you must devise your strategies according to the observations that you make in the market.

You can join the premium channel of Stocks Fetcher to make the best returns from the Indian Stock Market. You can read the details about it from here – StocksFetcher Premium